Home NEWS Millions of cars in Spain will not be able to enter city...
Facebook
Twitter
WhatsApp
Telegram
Copy URL 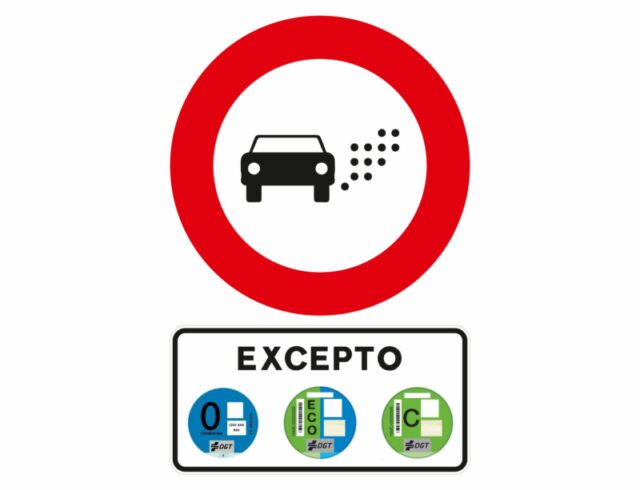 January 1, 2023, is the day that millions of passenger cars will be denied access to the center of 149 cities in Spain. On that day, the royal decree that regulates low emission zones (ZBE) comes into force. The Council of Ministers approved the law on Tuesday, December 27. Very few municipalities will, however, comply with the obligation to establish areas restricted to traffic.

The climate change law obliges municipalities with more than 50,000 inhabitants to have ZBEs that leave out the most polluting cars. Thus, those without an environmental badge from the General Directorate of Traffic (DGT), some 9.9 million in all of Spain, will not be able to circulate through city centres.

The municipalities concerned by the measure “must adopt sustainable urban mobility plans before 2023” that contribute to “improve air quality and mitigate climate change”, stated the Ministry for Ecological Transition in a note after the approval of the decree, and for this, the municipalities may establish temporary or definitive measures.

This implies the creation of areas with access, circulation, and parking restrictions in at least 149 cities, plus those with more than 20,000 inhabitants that exceed the limit values ​​of regulated pollutants.

Despite the fact that the climate change law, approved in April 2021, requires the implementation of ZBEs “before 2023”, non-compliance with the regulations is likely to be massive. According to data compiled in October, only 20 of these consistories are actually prepared to implement the measure.

Many of them cited the absence of a clear regulation on which to base infringements, now included in the recently authorised royal decree, as justification for the overall delay.

However, Teresa Ribero’s department (Environment Ministry) has refused to provide the consistories an extension because they already had plenty of time to prepare the ZBEs. The required guidelines for the creation of ZBEs were provided in a paper that the Ministry for the Ecological Transition and the Spanish Federation of Municipalities and Provinces (FEMP) presented back in November 2021.

The FEMP itself had prepared a technical guide together with the DGT and the Barcelona Metropolitan Area with criteria for developing restricted areas. The starting point is the environmental labels for Traffic and the general guidelines of the royal decree, the draft of which has been in circulation since April 2022.

According to the standard, the size of the LEZ and the exposed population “must be significant and sufficient” to improve “air quality” and promote “more sustainable modes of transport.” The law prohibits cars that emit more CO2 and indicates that ” the access of vehicles with 0 emissions will be prioritised .”

Each council has to establish its criteria (affected areas- entry requirements). As the guide of the federation of municipalities points out, the possibilities are many, starting with these two extremes.

A small but very restricted LEZ may be created (only for cars with a Zero label, for example) or a much larger one that allows the passage, however, of a greater number of vehicles, provided they have a label. Between both options, the combinations will vary depending on the specific urban needs.

Either way, they should be effective. The text obliges city councils to ” improve [air quality] compared to the starting situation” and points out, as its main objective, compliance with the World Health Organization guidelines on air quality.

The royal decree also says that the areas “shall be marked clearly and recognizably at the access points to it, using the signal […] approved by the DGT”. Compliance by drivers is entrusted to traffic law.

Since March of this year, it includes as a serious infraction “failing to respect the movement restrictions derived from the application […] of the low emission zones.” The sanction is 200 euros, without deduction of points.

First electric car with over 1,000 kilometres range launches in Europe