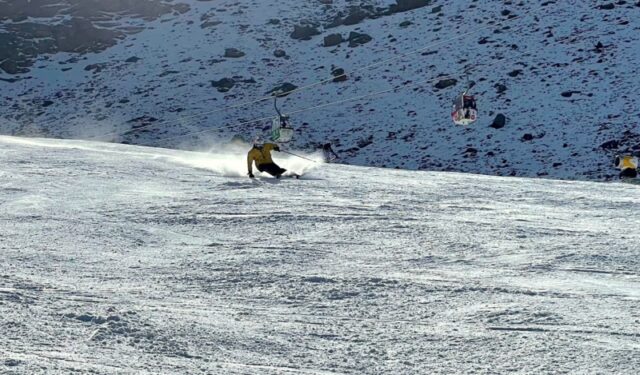 The opening of the El Río slope has been possible thanks to the production of snow when the temperature and humidity conditions have allowed it and the contribution of snow from other areas to complete the last meters of the route to Pradollano.

With this, the resort not only incorporates one of its most iconic slopes but also makes it possible to ski down from the Borreguiles area directly to the accommodation establishments or the Pradollano car park. Until now, the connection was only possible through the Al Ándalus and Borreguiles cable cars.

With the 30 kilometers open, the station reaches 30 skiable kilometers and 34 slopes in four of the six sectors of Sierra Nevada, although the opening of Loma de Dílar is reduced to the Cecilio slope, and a mini snowpark is installed next to it.

Equally relevant or more than the open kilometers are the 1,100 meters of unevenness that the Sierra Nevada offers from now on. It will reach its maximum unevenness (1,200) when the Laguna chairlift can come into service. In the Laguna area, the Trucha track is partially open, with access from the Zayas ski lift and exit via the Laguna pass.

The opening of El Río will also make it possible to ski down the slope of the Three Kings on the evening of January 5th.

The Sierra Nevada mountain range in the province of Granada, Spain is popular for its outdoor recreation opportunities, particularly skiing and snowboarding. It is known for its high-quality snow and a variety of runs that are suitable for skiers and snowboarders of all abilities.

Skiers are facing a winter washout in France after unseasonably mild temperatures closed half of the country’s ski slopes. Many resorts in France, and even in Switzerland and Austria, which rely on Christmas ski tourism for survival have been closed.

Cocaine ´Super-Cartel´ busted by Police in Europe and Dubai