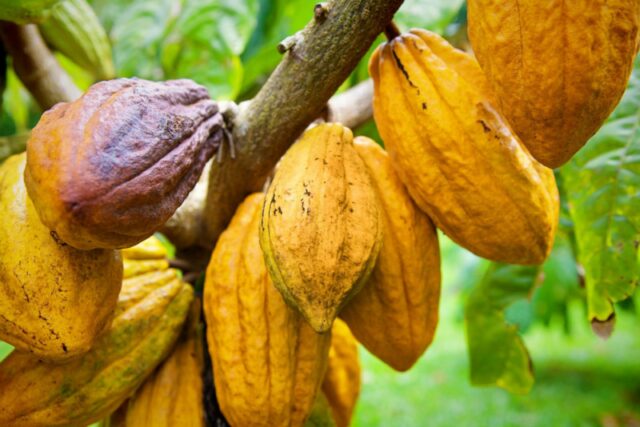 Researchers at La Mayora in Agarrobo harvested 100 Kilos of cocoa pods from 80 plants grown in two greenhouses. The Institute of Subtropical and Mediterranean Horticulture (IHSM) ‘La Mayora’, a joint research institute between the University of Malaga and the town of Algarrobo, has been growing cocoa trees in greenhouses since 2019 and recently harvested four varieties of cocoa pods.

Iñaki Hormaza (picture below), head of the Subtropical Fruit Growing department at the experimental centre, explained that the idea first came about during conversations with owners of the only chocolate factory left in Andalucía, La Despensa de Palacio, located in the town of Estepa in the province of Sevilla.

Its managers were also interested in producing cocoa to make gourmet chocolates. Many people in Spain enjoy chocolate, as it is a popular treat and ingredient in many Spanish desserts.

With the high influx of tourists to the region of Andalucia and the popularity of chocolate in Spain, the market is there waiting for new products- especially home-grown ones.

Hormaza and his team are cultivating around 80 cocoa trees in two greenhouses; one heated and one unheated.

The first harvest has been deemed particularly successful due to the fact that it has been achieved, not only in the heated greenhouse but that a similar result was achieved in the unheated one.

“This has been achieved thanks to the laboratory technician Ruth Aranda manually pollinating the flowers,” Hormaza explained. He went on to say that they have used pollinating insects in the greenhouse. “We are studying what they are because we don’t have the insects of the Amazon here,” he added.

“There are probably still several years to go before we can enjoy chocolate with cocoa seeds produced in Spain, but the successes in adapting other crops from the tropics, such as avocado, custard apple, mango, dragon fruit, lychee, have been very successful,” Hormaza also added.

Horse-drawn carriages in holiday destinations to be phased out

Well, That’s politics for you!