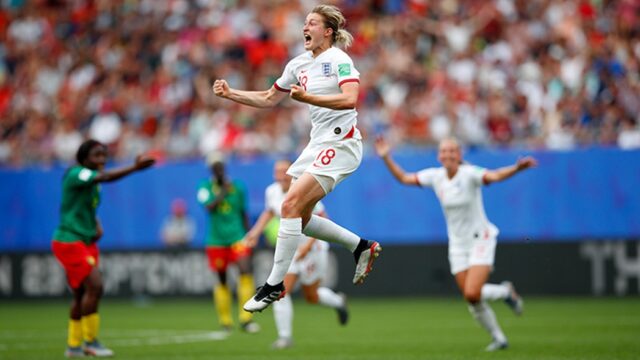 After a long 56-year wait, the Lionesses fought triumphantly for their Euro Win on Sunday, competing against Germanys’ Die Nationalelf (The National Eleven) 2-1 in a nail biting, unpredictable Euros final.

The UEFA Womens Euro Tournament was held in Wembley Stadium on Sunday 31st August, where a record-breaking audience supported the Women, selling out at 87,192 fans and filling the stadium entirely – another triumphant record in history not only for women’s sport, but topping the largest football stadium turnout figures of any match to date.

After the whistle blew at 90 minutes, the scores stood painstakingly even at 1-1, with penalties on the cards until Chloe Kelly scored England’s winning goal just 10 minutes in to extra time!

History appears to have repeated itself as Germany did not take the loss so gracefully.

Bild, one of Germanys leading Newspapers, have claimed they were ‘scammed’ & ‘cheated’ after they were refused a penalty for a ‘clear handball’.

‘We are cheated, again, almost exactly 56 years after the Wembley goal scandal.’ Bild boldly claims, in reference to Lionesses captain Leah Williamson, where during the first half the ball appeared to hit her hand during a goalmouth scuffle.

Germany appealed for a penalty to Ukrainian referee Kateryna Monzul, but after a brief VAR check, the penalty was not awarded and play resumed and led onto England’s Victory.

German Media and fans protest  ‘Wembley fraudagain! Even with video evidence, we are being scammed..’

The media nemesis, Bild, refer to Sir Geoff Hursts game-changing hat-trick which solidified England’s defeat against Germany in 1966.  To this day, the 4-2 result still sparks debates throughout football whether his third goal crossed the line.

On the opposing team, the Lionesses have been busy celebrating and are yet to make comment on this.

England’s new Hero, Chloe Kelly has become the Nation’s new Sweetheart after hilariously ripping off her t-shirt and lapping the field in glory after scoring the winning 2-1 goal.

Her celebratory antics didn’t stop there however, as she later amused the nation once again when she dropped her microphone to the BBC mid interview and ran back on the pitch to sing along to Sweet Caroline with her team mates.

“Look at them. It’s amazing, honestly.” She excitedly stated to the interviewers whilst gearing up looking back at the fans. ”Thank you every single person that got out to support us. This is unreal.” Were her last words to the camera before uncontrollably bursting into the legendary Anthem by Neil Diamond, dropping her microphone and pouncing on her team mates.

It’s only natural she was too excited to comment, however she did eventually return to give her response:

“Honestly, it’s amazing. This is what dreams are made of. Thank you to everyone that came out to support us. I started as a young girl watching women’s football and now this. It’s unbelievable.”

She added: “Thank you to everyone that played a part in my rehab because I always believed I’d be here but to be here and score the winner, wow!”

Monday 1st August, at 11am the 7,000 Lioness fans are invited to join the Chloe Kelly and the team at Trafalgar Square for the daytime special presentation to celebrate England’s First Womens EURO Win.

You can expect a victory lap, Q&A’s and a lot of cheering whilst the tournament highlights are shown on large screens throughout the day.

The Finale was shown at Trafalgar Square on Sunday night, with a number of fans celebrating in the fountains upon the final whistle blowing, and England, finally bringing it home after 56 years.

The event will be broadcast live on BBC One and BBC iPlayer from 12.40pm onwards.

What do you think to Germanys claims? Were they cheated? Let us know your thoughts!