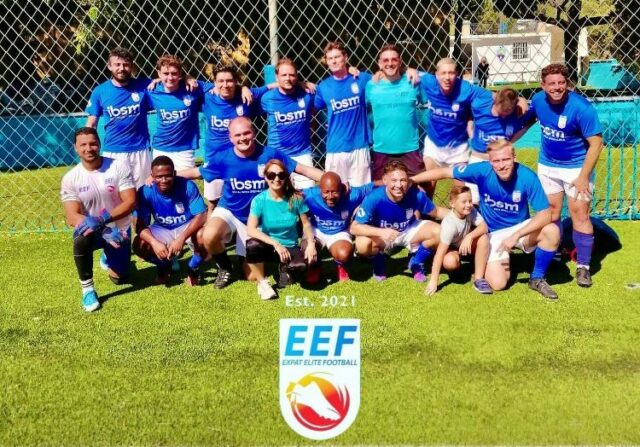 In what has been dubbed the Costa Del Sol ‘El Classico’, this Saturday we saw both teams face off again at the Marbella Campo Arroyo Estadia.

Coming off the back of a 4-2 victory in the previous encounter between both teams, Expat Elite Football knew that revenge was firmly on the cards for CF Los Curresqueros.

Going into the game, EEF were without joint top scorers Jake’s Smith and Aleks Strauss and gave starting debuts to Christian Cudjoe and Miles Yeatman.

As the game began to settle, EEF began to control more of the game with Cudjoe, Sims and Simon becoming too much for the away team to handle. Debutant Yeatman created EEFs first too good opportunities and looked more and more of a threat as the game progressed with 2 great link up moves with Sims and Mosel having is shot blocked then firing just wide.

The deadlock was finally broken with Marriott, who had now moved in to a move forward position, won and calmly converted his penalty after a sustained period of EEF pressure to go into the break 1-0 up.

After a positive half time team talk, EEF were clear on what the second half needed and they did not disappoint. EEF came out with the much stronger of the 2 sides with Cudjoe completely dominating the midfield which allowed Sims, Mosel and Yeatman to freely attack Los Churresqueros and it wasn’t long until the sustained pressure paid off. Cudjoe won the ball in midfield, played the ball out wide to Mosel who cut inside to beat 2 players, laying off the ball to Sims who in a moment of magic, beat 4 players on his way to through the defence to drill a perfect cross into Yeatman who had timed his run perfectly to make it 2-0.

EEF introduced Dutch striker Daniel Parijs, who had a part to play in EEF’s third. After winning the corner, the ever influential Marriot whipped in a magnificent corner at the near post that was helped on by Parijs and deflected off the Los Churresqueros defender. The game was surely now out of reach at 3-0.

EEF continued to dominant and several fine saves from the keeper, one in particular was a one v one with Mosel.

Los Churresqueros did pull one back as the game started to heat up with several late tackles starting to happen and tempers flared, particularly after what seemed like a blatant foul on the superb Ian Touali in the EEF goal, but the referee deemed the challenge fair.

As the game began to spill over but there was still time for one more moment of magic. It came from an EEF corner, where Connor Sims hit the most exquisite cross which ended up in the far top corner to wrap up a deserved 4-1 win for Expat Elite Football.

Some outstanding performances for Expat Elite Football in particular debutants Yeatman and Cudjoe who were hugely influential through out the game.

Particular mention must go to the back 5 of Touali, Bernard, Jackson , Woots and Sobczyk who gave the perfect platform for the team to win and fought tirelessly to contain a very talented opposition.

Man of the March, Christian Cudjoe.

The heat threatens the agricultural harvest