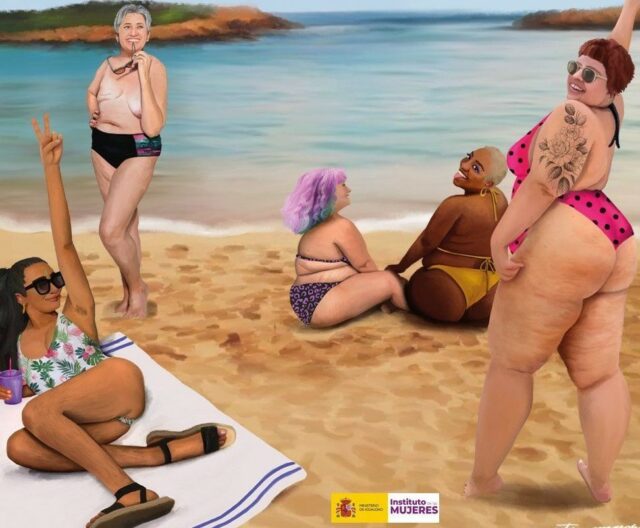 These were the words the Spanish Ministry of Equality intended to inspire women across Spain to become more comfortable and at peace with their body as we headed into the hot, summer beach months here in Spain.

But it appears despite all the best intentions, the ministry may need to brace themselves for more than just some heat from the sun.

Several of the models used in the campaign have been left “furious” after finding out the government used their images without their permission or authorisation and for one model, they even went one step further and edited out her prosthetic leg

Sian Green-Lord, 32, who lost her leg in an accident back in 2013 when a Manhattan taxi mounted a pedestrian walkway as she walked with her friend, she only found out about the campaign when friends messaged her about it.

Green-Lord, who has over 15k followers on instagram thanks to her inspiration story, told her followers of her rage and that she was left “shaking with rage” after discovering that not only had they used her photo without consent, they also edited out her prosthetic leg and even went as far as to change the swimsuit she was wearing in the photo.

“I don’t know how to even explain the amount of anger that I’m feeling right now,” she said in the video. “There’s one thing using my image without my permission. But there’s another thing editing my body.”
“I literally don’t even know what to say but it’s beyond wrong,” Ms Green-Lord added.

The feature shows 5 women posing on a beach including one brave lady who has had a mastectomy, underneath the slogan “the summer is ours too”. Ms Green-Lord can be seen on the bottom right of the photo.

She was not the only model who was effected by this. Reporting in the BBC, Nyome Nicholas-Williams, from London, told the BBC that an image from her Instagram page was used in the poster released by the Spanish Institute for Women.

Following the backlash, Arte Mapache was forced into making an apology to the women for using their images without permission

Mapache is quoted as saying “Given the – justified – controversy over the image rights in the illustration, I have decided that the best way to make amends for the damages that may have resulted from my actions is to share out the money I received for the work and give equal parts to the people in the poster“.

“I hope to be able to solve all this as soon as possible, I accept my mistakes and that is why I am now trying to repair the damage caused,” she added.

There has not been a public response from the Spanish Government on the matter yet.

In an explanation of the campaign earlier last week, the Women’s Institute did release a statement saying the campaign was “a response to the “fatphobia, hatred and the questioning of non-normative bodies – particularly those of women, something that’s most prevalent in the summertime”.

Have you ever been the victim of images being used without your consent? We would love to hear your story!