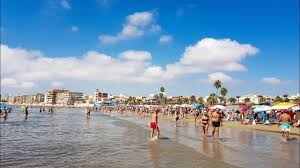 When I first began at my teaching job at a school in Marbella back in 2013, I was astonished to learn that many of the staff left Spain for the whole duration of the 8-9 week holiday. Why, after working hard all year in one of the world’s top holiday destinations,
would you then choose to leave just as you have almost two months of free time?

Almost nine years later, the answer is clear. The residents of Spain at best tolerate, and at worst, abhor the summer months. But what makes it so excruciating for those of us who choose to – or have to – stick it out for July and August?

Firstly, it’s insanely hot. Too hot to do anything useful and too hot to sit by a pool. The kind of heat that makes you swear at bath towels as they fall off your clothes airer outside. Attempting to blow-dry your hair leaves you literally dissolving into a puddle
of water on the floor, putting you in the world’s worst mood ever as you leave the house. On the few cloudy days, the sun is replaced by vile, sweaty, humid air which really is no improvement!

And then there’s the ‘Highway to Hell’ – the A7. Channel 4 could easily make an entire series about the shunts, queues and accidents that take place daily on this dual carriageway of doom. The most frustrating of these are the queues caused when the incident is
on the other side of the road – rubberneckers slowing down the entire flow of traffic to gawp at what’s going on.

In fact, getting into your car in the summer often resembles the part of the driving test where a computer-based car has to dodge numerous hazards appearing from all angles. Without any warning, the driver in front can put on their hazard lights, stop to wait
for a parking space, run into a shop, or merely pause for a conversation with a pedestrian they know. Cars travelling the wrong way down one way streets is a regular occurrence, and the best examples of these have drivers who wave their fists angrily at you
for being in their way.

But of course, no critique of Spain’s summer would be complete without mentioning the tourists. Certainly, Spain relies on tourism to keep its economy afloat. In a post-Covid world we are delighted to see local businesses flourishing with the influx of visitors
from all over the world. But when this translates into lobster-red holidaymakers, pushing trollies laden with giant bottles of water, screaming at their poorly behaved children in in supermarkets, we find our patience wearing thin. On one momentous occasion,
I heard a middle-aged Brit exclaim to his wife in disgust – “Everything’s in Spanish!” while trying to operate the fruit and veg weighing machine.

And so, most of us grin and bear it, crank the air-conditoning up and stay indoors. We venture out first thing, while the holidaymakers are sleeping off their Sangria headaches and before the flames of hell begin beating down on the pavements. We wait for September,
when life becomes cooler, less stressful and quieter. And we consider that perhaps next year, going away in July and August might not be such a bad idea.